Haleakala: To The Edge Of The Volcano 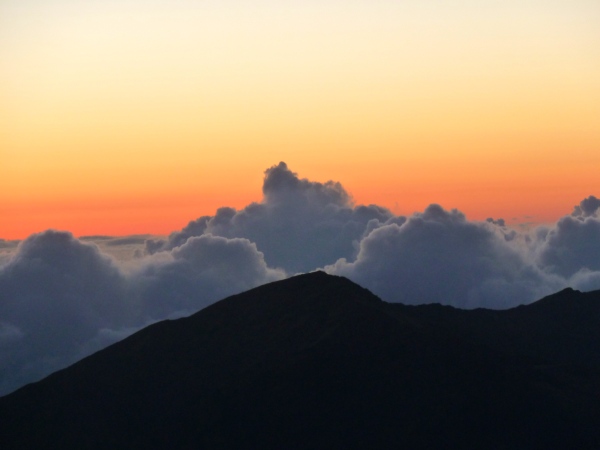 Three months ago I experienced one of the greatest spectacles of my life  – a moment to be filed away and savoured on the difficult days. I saw the sun rise over the crater of the Haleakala volcano on the beautiful island of Maui, part of the Hawaiian Islands.

After a night without sleep – I didn’t dare – I was collected at 2am for my ride to the crater. Haleakala is the third  largest volcano in the world and one of its great energy centres. We would climb to 10,200 feet and there watch the sun rise over the edge of the crater. Haleakala is so high it sits above the clouds and waits for the first rays to caress its twisted slopes. Standing at its edge feels like flying.

While it was balmy down at the beach, even at that hour, it would be bitterly cold at the summit and a little difficult to breathe, but I knew that when the sun came up through that dense cloud layer there would be magic.

We were blessed with the most perfect morning. Even our guide was stunned. There are many times when people have risen early, driven for two hours, and made the ascent only to find the dormant volcano shrouded in cloud and fog, or the wind blowing so hard it is too dangerous to stay at the summit and they must descend. We held our collective breath. There is no true indication of what the weather will be until you pass the 8,000 foot mark. Beyond that Haleakala makes her own weather and she is capricious.

Winding up the volcano in pitch darkness we looked up at the stars and down to see fields of sugar cane burning – orange patchwork squares on the landscape.

There was a thin pink line on the horizon as we arrived at the top of the world. Everything else was black blending to indigo. It was cold, yes, but so still and clear we could see the crescent moon and a crackling of fiery stars.

Close to 1000 people waited, poised on the very rim of the crater, all eyes turned to the east. I wriggled and wriggled and wriggled until I had subtly moved through the crowd to the very front. Focused as they were on that tiny strip of light, no-one really noticed the woman in the bright blue surf shirt, layered with a t-shirt and fleece who casually leaned on the railing as though she had been there all along. I had to have a front row seat – I just had to. 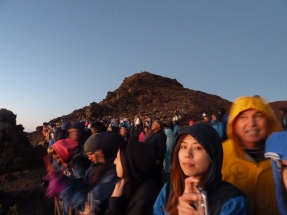 As time passed the sky became a layer of mango and pineapple against the creamy lavender ice-cream cloud layer and a dark chocolate lava biscuit base. (Do you have any idea how hungry staying up all night makes you?)

“Here it comes!” someone shouted as a fine wire of gold ran around the edge of the clouds below us. The mighty crowd cheered. As the curve of a fiery disc peeked over the clouds, a lone male voice rang out in a Hawaiian chant from deep in the darkness. It was joined by another pure voice, blending to create a joyful crescendo of song as the sun made its journey fully into the sky.

Slowly the crowd dispersed and we returned to our small bus where our driver Wayne waited with hot chocolate to warm numb hands. “The song wasn’t what you think,” he said as we sipped. We looked at him puzzled. “You think it was a song to welcome the day and celebrate the rising of the sun.” We nodded.

“It was a welcome, yes. It was a welcome to the seekers of knowledge – you. The divine ones who came to stand at the edge of the volcano in pitch darkness trusting the light would come.”

On the way back down the volcano we hiked in to a lesser known spot – a place where baby craters are born – their mouths gaping open like hungry fledglings. The colours that painted the walls from which they had sprung were so beautiful – red and gold sand, hardened black lava, yellow sulphur.

We were the only ones there and stood silent in awe – our tiredness swept away. There was amazement at our good fortune and some tears. Later, after we had carefully picked our way back down the shifting slope to where Wayne waited, he said that normally this part of the volcano, which stands at 7000 feet is completely hidden inside the cloud layer. He had only seen it a few times himself, but today the conditions were so perfect it could not remain hidden from us. Nor did it seem to want to.

As people clambered off the bus at their various hotels at around 11am (already having put in a nine hour day) they shook his hand, hugged him, thanked him. “It was the best day of my life!” one man who was visiting from India trumpeted, embracing him and slapping him heartily on the back. “Mahalo God”. He bowed, hands pressed together. We could not help but nod solemnly and agree. Then, like the sun, the joy came out, and lit up all our faces.